'SOSE Sidha Kisan Se' has now started Home Delivery of organic fruits in Ahmedabad West, Book your orders here or call us on +91-7405095969.

Blessing to farmers during times of adversity: 40+ friendly bacteria to raise land fertility, at no cost to farmers!
5 December, 2019 by

In a development that would be of great interest to organic food lovers in the country, Bansi Gir Gaushala has developed an amazing agricultural probiotic culture named 'Gir Go-Krupa Amrutam'. This culture has over 40 friendly bacterial strains that perform a range of different functions for the plant, and results reported by farmers have been extremely encouraging. This culture is developed using panchgavya of pure breed Gir Gaumatas and various other Ayurvedic aushadhi's (herbs) with many years of research and experimentation in collaboration with leading Ayurvedacharya's and Agricultural Universities of Bharat. This is being offered by The Gaushala at absolutely no cost, as a blessing of Gaumata to all the farmers of Bharat under its vision "Samruddh Kissan, Samruddh Bharat".

What are friendly bacteria, and why are they so important to land fertility?

Bacteria are single celled microscopic organisms that are present virtually everywhere, from soil to the atmosphere and oceans. The human body shares a symbiotic relationship with trillions of friendly bacteria, which outnumber human cells 3 is to 1! Bacteria are the very source of sustenance of life, and perform an incredible wide range of functions, from boosting immunity to absorbing nutrients. Modern science uses friendly or probiotic bacteria to treat diseases from digestive disorders to depression. For example, bacillus clausii is a soil based bacterial strain which is used to treat diarrhea in children. However, few people understand or realize that bacteria are as important for health of the soil as they are to human health.

In the soil, bacteria perform a range of different functions starting with absorbing atmospheric nitrogen, helping plants absorb mineral nutrients from the soil to keeping pathogenic microbes and pests under control. In an environment that is devastated by pollution and chemical based farming, the soil has been robbed of its rich microflora of friendly bacteria over the last few decades. In 1970 before the 'Green Revolution', 1 gram of soil contained over 20 million units of friendly bacteria. Currently, less than 20% of these remain. As a result, soil fertility has reduced and with passing years farmers require increasing amounts of fertilizers like urea & DAP and more pesticides to harvest a healthy crop. Further, urea forms a layer on the soil which reduces water absorption and ground water levels.

Why is Gaumata still relevant to modern Bharat and Humanity?

Bansi Gir Gaushala is on a mission to revive Bharat's ancient 'Gau Sanskriti', where Gaumata was at the center of all life activities, including agriculture, economics, education, business, etc. The Gaushala is also keen to re-establish the modern 'Cow' to Her original exalted position of 'Gaumata', the Divine Mother, a position which She enjoyed in ancient times. We strongly believe this is the solution to many of the challenges facing humanity today. With the advent of modern agricultural practices, farmers no longer feel the need or find it viable to keep indigenous breed Gaumata's at their farms. As a result, the 'Cow' as merely become a factor of production for the dairy 'industry', which has developed technologies to improve milk 'production' while being insensitive to Gaumata's needs & suffering.

As a result, while Gaumata suffers from inhuman exploitation and neglect, farmers of Bharat are increasingly getting buried under high input costs of modern agriculture and lower income. The Society as well as Environment in general also suffer from poor health outcomes due to products of conventional chemical based agriculture. Agriculture is the foundation of 'Gau Sanskriti', and there is a dire need to re-instate Gaumata at the center of Agriculture in Bharat.

Why is Gir Go-Krupa Amrutam the solution to farm distress?

In agriculture, bacteria perform a range of functions that include absorbing mineral nutrients present in the atmosphere and the soil and supplying them in pre-digested form to the plants. They also perform the role of controlling pathogenic micro organisms as well as pests in the soil. Gir Go-Krupa Amrutam is a powerful culture of friendly bacteria which can replenish the lost microflora of the soil which was so essential to undertake natural farming.

Once the soil becomes healthier with balanced microflora with help of Gir Go-Krupa Amrutam, farmers would no longer need the crutches of synthetic urea, DAP and pesticides. Using Gomay ('Cow' dung), Gomutra and buttermilk based natural fertilizers and pesticides, farmers can undertake fully natural farming. Scientific research proves that Gomutra has over 5,000 different mineral compounds and Gomaya has another over 1,100 compounds which can be beneficial for human, soil as well as plant health. Each Gaumata can produce over 3 tonnes of precious Gomay and Gomutra annually, farmers in ancient Bharat fully exploited this fact and became prosperous. Gaumata can again find Her rightful place at the farms where she can have an abundance of food from agri waste which currently the farmers burn as stubble. The farmers can enjoy much higher levels of prosperity with zero or reduced costs on buying artificial fertilizers and pesticides. 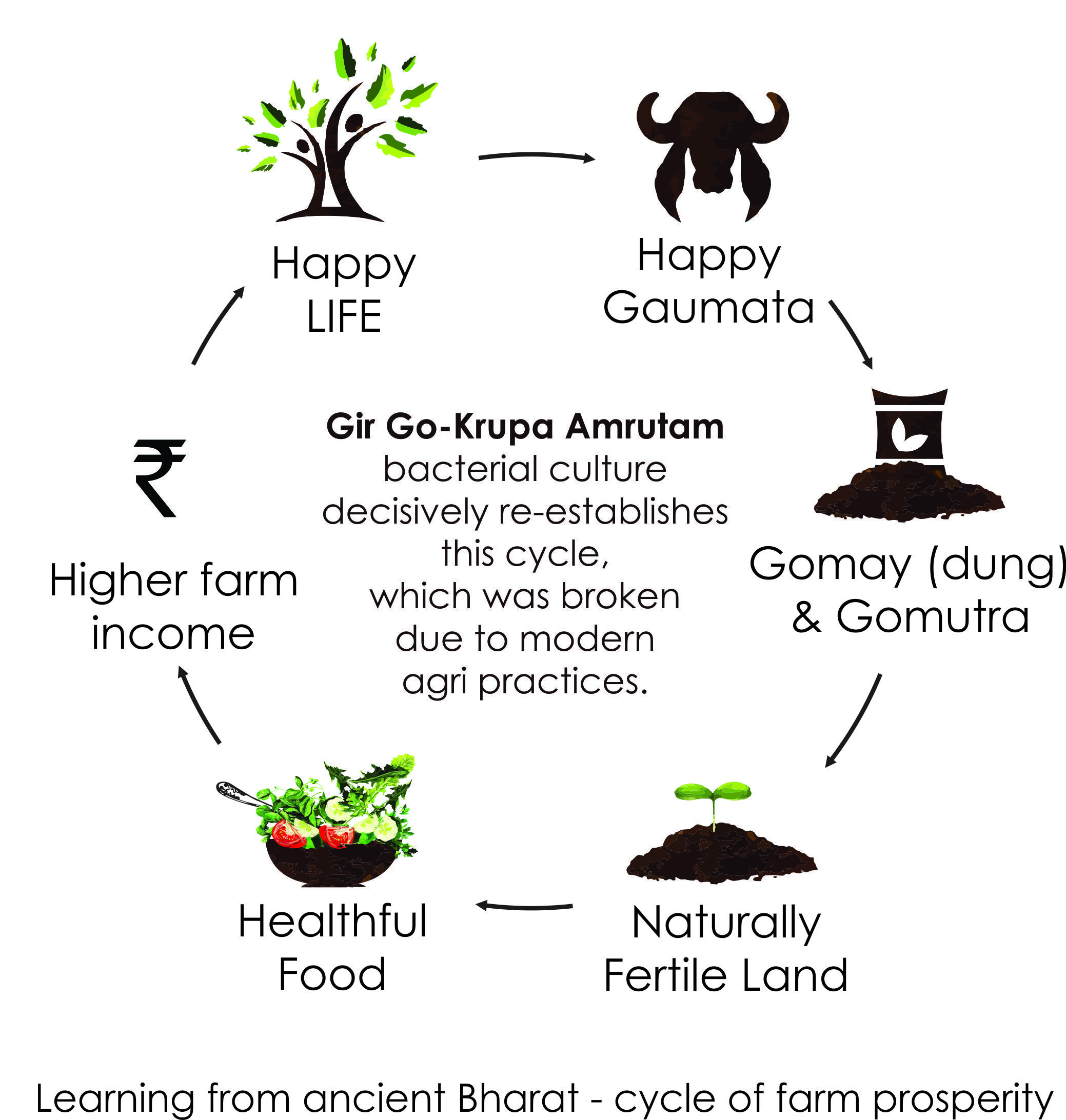 Gir Go-Krupa Amrutam has been accepted for use by over 10,000 farmers so far. Free distribution Centers have been set up or are under process of being set up by farmers groups and educational institutions in Gujarat, Maharashtra, Rajasthan and Madhya Pradesh. Farmers in these states have used this culture in over 37 different crops / fresh produce with revolutionary results. Gir Go-Krupa Amrutam is helping hundreds of farmers to fully eliminate their costs on synthetic fertilizers & pesticides from the first season itself. Farmers have reported improved plant health, higher quantity as well as quality of produce. Scientists from various Agricultural Universities in Bharat have either collaborated in the process of its development or extensively tested this culture and strongly encouraged its use by farmers.

What does Gir Go-Krupa Amrutam exactly do?

This bacterial culture has over 40 different strains of friendly bacterial strains which start spreading in the soil when used in the right manner. From these strains, there are -

2) 4 strains which absorb Nitrogen present in the atmosphere and supply it in digestible form to plants. Some other strains also absorb Phosphorous from the soil and supply it to the plant.

3) 6 strains which are classified as “Geobacter” in scientific terms. These bacteria absorb metallic & mineral elements from Gomay, Gomutra or soil and supply it in easily digestible form to the plant roots.

4) 6 strains which help in composting, and Lactobacillus bacteria which boosts plant growth and quality of their outputs.

5) Many other strains of bacteria are also present which boost plant growth and improve quality & quantity of their fruits.

6) This culture also helps in the development of earthworm ecosystem which is a farmer's best friend. Among other things, earthworms help to make the soil porous which helps the land to absorb more water and recharge groundwater levels. As a result, this culture would also help to reduce the use of water in agriculture over time. 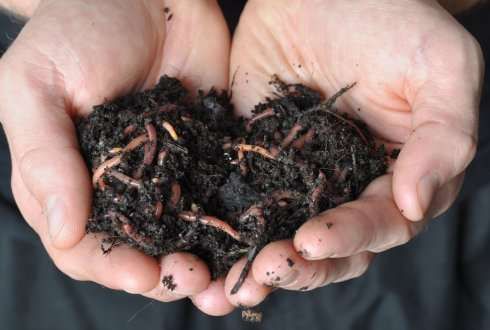 How is Gir Go-Krupa Amrutam to be used?

Friendly bacteria present in Gir Go-Krupa Amrutam thrive on Gomay of desi (indigenous) breed Gaumata's. When used in the right manner, this culture can bring revolutionary results at the farm. The Gaushala advises farmers to use this culture in a small portion of their land as a test, and extend its use in the entire farm after gaining confidence about its use and results. One liter bottle of this culture can be procured from Bansi Gir Gaushala on any day between 3 pm to 6 pm. The Gaushala also conducts seminars at various locations to distribute this culture among farmers and train them in using it. The method of use is detailed in the leaflet which is available in 3 languages on the Gaushala website at this link - https://www.bansigir.in/downloads

Shri Gopalbhai Sutariya talks about a new revolution in farming - Gir Go-Krupa Amrutam Agricultural Probiotic which has the power to heal and replenish the soil with beneficial friendly bacteria.

Developed after many years of research and collaboration with leading Agricultural Acientists and Ayurvedacharya's of Bharat, this  culture has over 40 different strains of friendly bacteria and is being offered free to farmers by Bansi Gir Gaushala.

Read Next
Bansi Gir Gauveda at The Farmers' Market, Mumbai