'SOSE Sidha Kisan Se' has now started Home Delivery of organic fruits in Ahmedabad West, Book your orders here or call us on +91-7405095969.

What does Gaumata eat? Why is it important to you?
Insights from Bansi Gir Gaushala
15 February, 2020 by

Expecting Woman vs Expecting Gaumata - is there a difference?

Since ancient times in various human civilizations across the world, when a woman is expecting or has just delivered a child, great care is taken to help her remain stress-free, happy and healthy. She is offered nutritious foods for her own as well as for the well-being of her child. In Bharatiya traditions, you would have observed special 'Aushadhiya' (herbal) sweets being prepared at homes for expecting Mothers to reduce the imbalance of the three doshas. She is read the 'Shastras' (scriptures) to hopefully provide the right 'Samskaras' to the developing fetus or the newborn baby. Special havans & pujas are undertaken to create the right spiritual environment for the baby's well-being. In ancient Bharat and other advanced civilizations like Greece, the expecting mother was surrounded by beautiful things to develop an advanced sense of aesthetics in the developing fetus. We must not forget that this is done not just for the expecting mother, but also for the well-being of her child. The child feeds on her Mother's milk and is also nourished by her love & attention. So caring for the Mother really helps the child to grow up and become a secure, happy and healthy individual.

Sadly, when it comes to looking after Gaumata ('Cow' as Divine Mother), humanity seems to forget the same principles. In the worst cases, Gaumata ends up looking for food in garbage dumps while Her milk ends up in urban households for consumption. Even after being the most intelligent animal species on Earth, we forget the fact that this ends up hurting our own Health as we drink the same Gaumata's milk. It is not just for religious or spiritual reasons but also for practical considerations that Rig Veda mentions thus, "We must regard the 'Cow' as our own Mother and serve Her to the best of our abilities, keeping her happy in every way". In fact, the Vedas go even further and accord a Divine status to Gaumata. When a Gaumata is looked after well, She becomes 'santusht' (satisfied) and 'prassann' (happy), and 'panchgavya' (milk, curd, ghee, gomutra, and gomay) of such Gaumata is regarded as being truly 'kalyankari' (beneficial) and 'mangalkari' (auspicious).

Caring for Gaumatas during Her pregnancy and beyond...

Vedic Gopalan is really about looking after Gaumata from the highest spiritual consciousness and following a set of protocols for the best spiritual, subtle and physical benefits. We have written about this extensively earlier (see the article 'The long journey that leads to the creation of Gir Ahinsak Gau Ghee') while detailing the practices at Bansi Gir Gaushala. In general, from a very practical point of view, Vedic Gopalan is not much different from humanity's approach towards Motherhood in general. Practices such as 'dohan' (where the calf can have a fair share of milk), not getting rid of older non-lactating or male Gomatas who do not give milk and undertaking daily havans help to keep the Gaumatas satisfied and happy.  In this blog, we shall detail the dietary aspects of looking after Gaumata.

Gaumata's diet - why are purity & variety so important?

Just as it is impossible for any two human beings to eat exactly the same quantity and quality of foods, no two Gaumata's are the same in their dietary preferences. What and how much each Gaumata eats is a function of a variety of factors that includes her current health, age, etc. However, in general, Gaumatas need a daily diet of 30-40 Kg of foods on average. In ancient times, Gaumatas had access to a wide and rich variety of dense green forests and grasslands to feed on. Much of this vegetation was inaccessible to human beings as we cannot easily digest plant foods like grass, plant stems, roots, etc. But through Her milk, these nutrients also became available to us. Ancient grazing fields also had plants of medicinal values, which Gaumata would feed on depending upon Her intuition and perception.
However, as we entered the modern age, these forests and grasslands have been lost. In the current scenario, in extremely rare cases and localities do Gaumatas have access to such grazing fields. As a result, farmers and dairy owners need to purchase foods for Gaumata. Even those Gaumatas who are "grass-fed" tend to graze on fields that lack a good variety to feed on. In worse cases, these grasslands are often prepared with grass varieties that are genetically modified or prepared using synthetic fertilizers and chemicals. All this affects the purity and richness of Gaumata's nutrition. And, as a result, we end up consuming milk products that lack the energy and vitality that is described in Ayurveda. The exploitative nature of modern dairy practices and cheaper quality foods given to Gaumata has resulted in a proliferation of diseases. This has prompted an entire movement of 'veganism' which goes beyond vegetarianism to exclude any kind of dairy from the diet with proponents of this movement highlighting the health benefits of doing so. 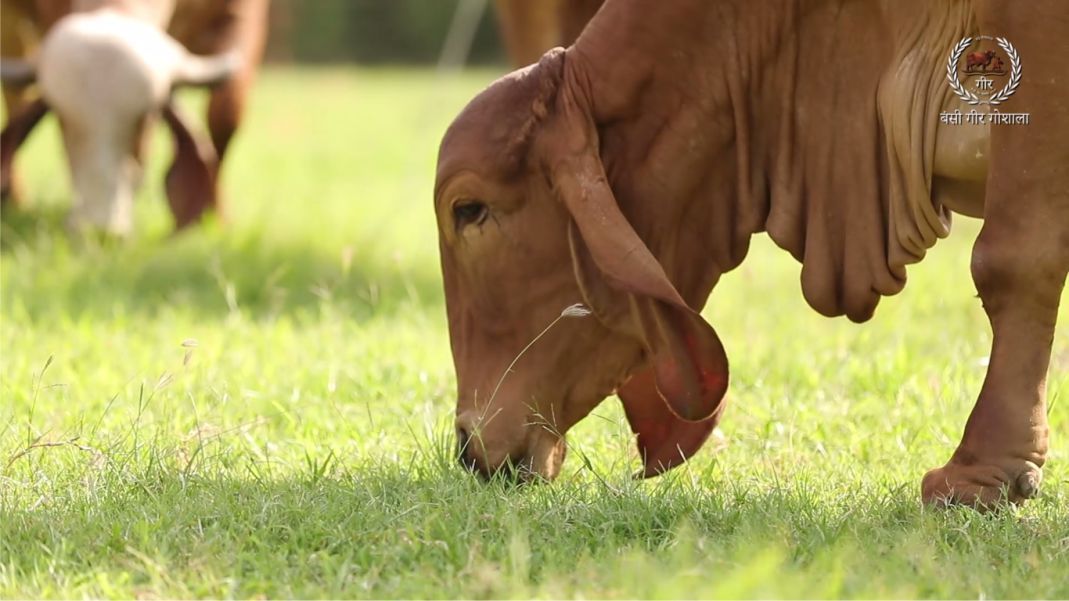 The subject of what to offer Gaumatas as food is given enormous significance at Bansi Gir Gaushala. The absence of dense forests and a wide variety of grazing fields is a challenge for modern humanity. While it is almost impossible to offer the same quality grazing fields to Gaumata in the modern age, the Gaushala works on solutions that can recreate the same richness of nutrition offered to Gaumata. These efforts can be described with the following points -

1) Research on grass varieties - Bansi Gir Gaushala has undertaken research into more than 100 different varieties of indigenous grass (non-GMO grass varieties that are native to the region rather than imported from overseas). Extensive laboratory testing indicates the nutritional value of each of these varieties. Gaumatas are offered these different varieties to gauge which variety is preferred by them. As emphasized in ancient Ayurvedic texts, Gaumatas have far better intuition and perception of foods than human beings. Based on laboratory tests on nutrition and Gaumata's preferences, few varieties of grass such as 'Jinjua', 'Go-Krupa' and 'Go-Krupa pochio' are selected and developed in the grazing fields. The grazing fields are then nurtured with natural manure which is further reinforced with Gaumata's gomutra and gomay as they graze on them.

2) Pure & natural plant foods - The Gaushala also sources pure & naturally grown feeds that are cultivated without the use of synthetic fertilizers or pesticides. These include a variety of crops such as jowar grown using ancient farming techniques, carrots, beets, bajra, corn, etc. Usually, the entire plant is offered to Gaumata, which includes the roots, stem, leaves and individual flowers or seeds in the plant. The Gaushala has observed that the Gaumata's seem to relish the entire plant, particularly the roots of some plants. The Gaushala also has its own natural farms from where these feeds are often sourced.

3) Customized feeds - The Gaushala also prepares customized feeds which are called 'daan' (दाण) in local Gopalan terminology. This is prepared from pure & naturally grown grains, seeds, jaggery, salt, etc. Strictly non-GMO ingredients are used to prepare these feeds, such as indigenous varieties of cotton seeds in contrast to BT Cotton which is often used in the conventional dairy industry. The Gaushala also prepares 'halwa' or 'sheero' for pregnant and lactating Gaumata's using pure & natural ingredients. This is a sweet delicacy with herbs that are prescribed in Ayurveda for pregnant or lactating Mothers.

4) Ayurvedic herbs - The Gaushala has developed strong know-how of various Ayurvedic herbs as a result of its association with leading Ayurvedacharyas of Bharat. Using this know-how, the Gaushala adds Ayurvedic herbs of rich medicinal value to Gaumata's feeds. These herbs may vary based on season and individual Gaumata health. To take a very simple example, during colder seasons warming herbs such as Giloy, Turmeric and Shilajit may be used, while during hotter months cooling herbs such as Arjuna, Brahmi and Shatavari might be added to the feeds. There are herbs that are beneficial during pregnancy, while others help during lactation, etc.

As described above, the Gaushala pays painstaking attention to Gaumata's feed. This meticulous effort pays rich dividends in terms of Gaumata health as well as the quality of panchgavya outputs. There are Gomatas at the Gaushala who have given birth to 16 calves and still giving milk at the age of 22 years. The Gaushala has also achieved impressive results with its 'Gau Adharit Ayurvedic Aushadhis' in a wide range of health conditions.  The Gaushala also strongly believes that the results seen at Gotirth Vidyapeeth Vedic Gurukulam in terms of the developing talents of students are also thanks to the blessings of Gaumata.

We are inspired by the mission of Bansi Gir Gaushala to revive Bharat's lost 'Go Sanskriti', and Gaumata centered way of living. We have seen first hand the effects of such a way of living in the fields of nutrition, agriculture, health and education. In our regular articles, we have written in detail about what is Vedic Gopalan, and how can consumers look for the best panchgavya products.

Consumers really need to understand and use these guidelines as they look for Ghee in particular and Gaumata products in general. We believe this can have far-reaching effects on the health of their family and communities. However, it is also important to understand that maintaining pure Bharatiya breed Gaumata’s with a traditional gopalan approach can involve significant costs to the farmers. As a society, we need to support such farmers by paying the right price for their products. We believe it is both ethical and in our interest to do so. We also strongly encourage consumers to visit the Gaushala or farmers from whom they buy ghee or other panchgavya (milk, curd, ghee, gomutra, gomaya) products, offer their encouragement & support for undertaking paramparic gopalan, and in the process gain the benefits of being physically close to Gomata. Gomata has a very special divine aura which modern research proves has very calming and healing effects. We believe paramparic gopalan and Ayurveda were among the most important secrets behind the physical strength, intellectual vigour, creativity and longevity of our ancient forefathers in Bharat.